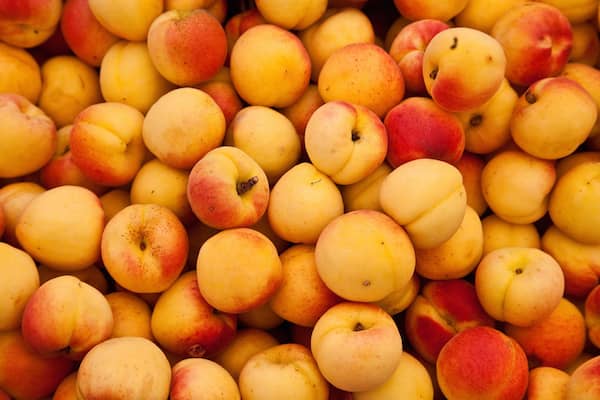 Fruit of the apricot tree, tree of the family Rosaceae, rounded, with yellow-orange skin and reddish hues. Its meat, juicy and sweet, has a floury consistency when the apricot is very mature.

There are references of more than 2000 years that mention the presence of apricot in the north of China. Like so many products, it came later from East to West and it is known that in Rome it began to be cultivated in the middle of century I a. C. Spain was probably brought by the Arabs who called al-barcuq, from which comes its present name . In the eighteenth century it was taken to North America, where it acclimatized in California and in the riparian states of the Missisipi.

Apricot is one of the fruit richest in carotenes with provitamin A activity, especially in beta-carotene, although it also contains minor proportions of others such as alpha and gamma carotenes and cryptoxanthin. Beta-carotene, in addition to being transformed into vitamin A in our body, has been linked to prevention against cancer, cardiovascular diseases, cataracts and senile macular degeneration.

It also contains small amounts of flavonoids, among which is quercetin (flavone), a bioactive substance that has been attributed antioxidant and antithrombotic activity (inhibits the formation of thrombi), so it could play an important role in prevention Of cardiovascular disease. In addition, some studies have indicated that quercetin inhibits the growth of some tumors.

The apricot contains organic acids such as malic and citric acid (capable of enhancing the action of vitamin C, promote intestinal absorption of calcium, and facilitate the removal of toxic waste from the body, such as uric acid), although It should be noted that maturation causes the quantity of these acids to decrease.

This website uses cookies to improve your experience while you navigate through the website. Out of these, the cookies that are categorized as necessary are stored on your browser as they are essential for the working of basic functionalities of the website. We also use third-party cookies that help us analyze and understand how you use this website. These cookies will be stored in your browser only with your consent. You also have the option to opt-out of these cookies. But opting out of some of these cookies may affect your browsing experience.
Necessary Siempre activado

Any cookies that may not be particularly necessary for the website to function and is used specifically to collect user personal data via analytics, ads, other embedded contents are termed as non-necessary cookies. It is mandatory to procure user consent prior to running these cookies on your website.